Nesta, the innovation charity, today released a new report about the developments in the alternative finance market. Originally set up in 1998, Nesta focusses on increasing innovation in the UK through sponsoring research, policy, partnerships and practical programmes. This report is the largest report ever done into the alternative finance market by Nesta and the University of Cambridge.

Still a very young industry, most companies have only been founded in the last five years, the alternative finance sector includes crowdfunding, peer-to-peer lending and invoice trading. These new companies have developed platforms which match individuals or companies looking for funding with funders, bypassing the banks. The sector has managed to double in size year on year over the last three years from £267m in 2012 to £666m in 2013 and now £1.74bn in 2014.

P2P business lending tops the 2014 alternative lending charts having lent out £749m in 2014 already. The report states that by the end of the year more than 7,000, or 2.4% of the total market, small and medium UK enterprises will have benefited from P2P lending, borrowing more than £1bn. This is in stark contrast to traditional bank lending to SMEs, which was down £400m in the last quarter of 2014 alone.

Equity-based crowdfunding is also developing fast, having grown 201% year on year to reach £84m in lent out capital.

After a record breaking 2014, the report predicts that the alternative market is to reach £4.4bn by the end of 2015.

Read the full report here and see an interesting infographic below: 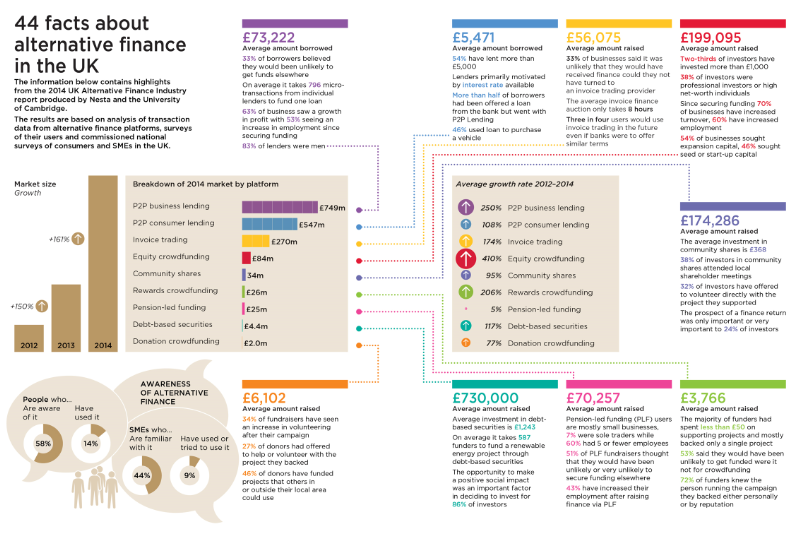