Lending Works recently reached a crucial milestone, as we lent out our 50 millionth pound since launching our platform in January 2014. The overall figure to date now stands at over £53 million, and it comes on the back of a record-breaking first quarter of 2017, with nearly £5 million worth of loans being facilitated by our platform in the month of March alone.

Our team celebrated the achievement with a dash of cake, as you can see from the image below: 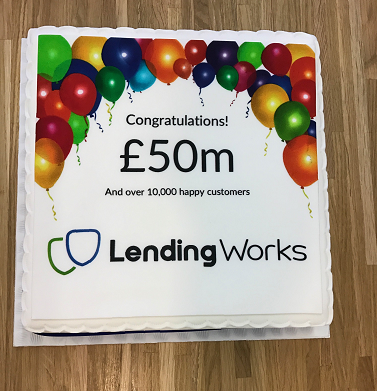 But it also allowed us the opportunity to reflect upon what has been a tremendous 40 months as a company, with accolades and feats along the way which include:

It’s a list which makes for impressive reading, although given our continued upward momentum, there is every confidence here at HQ that the best is very much yet to come.

Our CEO Nick had this to say about Lending Works’ journey – past, present and future:

"It’s incredibly rewarding to have come as far as we have since launching just over three years ago, and to have now passed the £50 million mark – with over 10,000 satisfied customers along the way – represents an important milestone for us. It is at times like this that I want to thank our extraordinary team for their hard work and determination. We could not ask for more dedicated colleagues.

“That said, we prefer to look forward rather than back, and with many exciting and ambitious new initiatives in the pipeline, we expect to breach the £100 million barrier very soon, and to grow our business exponentially thereafter. Our best days most certainly lie ahead.”