Pop the champagne corks and get your party hats on people… Because today, Lending Works turns two-years old! That’s right, 24 astonishing months have flown by since the magic began, and the company is unrecognisable from the small, but inspired group who kicked things off on that rainy Sunday morning in Farringdon.

Our Customer Service Manager, Steve, who’s been here since day dot, recalls that (un)memorable first day with a wry grin: “Having been heavily involved with the build-up to the launch, we came in on a Sunday, with a lot of excitement about the phones ringing off the hook as soon as the website went live. But of course, nothing really happened! It was quite comical really. We soon realised it was at that moment that the real hard work began, and we have since had nearly 100,000 customers sign up.”

Of course, things picked up rather swiftly from there though. Loan applications came in thick and fast in the first week, and one loyal lender thrust £10,000 into our platform even before our marketing really began.

But the best was to come in year two. From a product perspective, we added to our artillery with our Auto Income tool as part of a four-pronged approach to attract the newly liberated funds of over 55s in April. In terms of our website, we streamlined our online application forms, created a Help Centre, and added an in-depth Statistics page to further underscore our commitment to total transparency. And our fast-growing team (now 19 people) relocated to the plush new offices we currently operate from in August.

But commercially was where the greatest success of all came, as the company garnered new long-term relationships to secure a steady supply of institutional lending capital; set up an API for established partners to facilitate loans for clients independently; and, rather excitingly we have delivered new point-of-sale financing products, allowing participating partners to offer high-quality loans instantaneously.

Launching our point of sale financing products rounded off a hugely successful year in which we facilitated almost £15 million in loans – a threefold increase on year one – with every single penny due to our lenders having been received, and on time too. 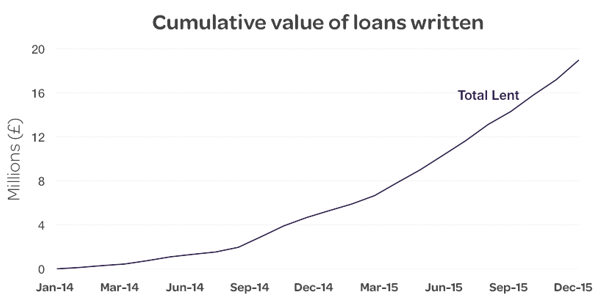 Our CEO Nick is understandably thrilled with the strides we’ve made, but, bullish as ever, he predicts that, in terms of growth, things are about to move to another level entirely.

“I can’t believe how quickly these two years have gone by, but it’s hugely rewarding to sit here today and reflect on the incredible progress we’ve made as a company,” he commented. “Like the old cliché, it really did start as a ‘back-of-the-envelope’ idea. Just two guys with stars in their eyes, with dreams of making a difference in the world of consumer finance.

“But today we’re the UK’s number-three consumer P2P lender, and – thanks largely to a series of progressive plans and relationships we have in place – we’re expecting to facilitate over £50 million in loans over the next 12 months.”

Fundamental to both the concept of Lending Works and its sustained growth is the customer. Without the trust and reliability of the platform’s lenders and borrowers, the model couldn’t last, and Nick believes that this special underlying relationship between borrower, lender and platform is the cornerstone to all parties enjoying the great benefits available.

“Rather than just being a cheap marketing platitude, our commitment to putting the customer first was the very inspiration for getting Lending Works off the ground, and our desire to deliver fair financial services to everyone has never wavered. We are grateful to all our customers – the lifeblood of our platform - who have played such an important role in our development.

Nick added: “But while we hope they have enjoyed reaping the rewards of being a Lending Works customer thus far, our message to them is a simple one… Our desire for innovation and to deliver a product that gets better and better burns as bright as ever. We firmly believe that the best is very much yet to come.”