It’s been a grisly period for investors in the wake of the turmoil in China.

The decision by officials to devalue the Yuan for three consecutive days in mid-August put pundits, stakeholders and investors on red alert that something was amiss. Fears that China’s economy is in slowdown were then realised on ‘Black Monday’, as Chinese stocks plummeted by 8.5%.

The reverberations from this ‘Great Fall of China’ were felt worldwide, with nearly £75 billion being wiped off the value of Britain’s leading companies – the worst day for the London stock market since the dark days of March 2009. This was aptly reflected by the performance of the ‘Footsie’ (FTSE 100), which, having peaked at an all-time high as recently as 27 April, tumbled by as much as 6.6% on Black Monday. In fact, it has plunged by nearly 17% since those heady times four months ago, and is now at its lowest level since 2012.

Of course, the ‘Footsie’ is notoriously volatile, and given its cosmopolitan complexion is an insufficient means to fully assess UK market conditions in isolation. But such dramatic numbers are hard to ignore, and for traders the sea of red that engulfed their screens that day will have been an all-too familiar sight, with the ghosts of 2008 having barely been laid to rest.

US Treasury Secretary Larry Summers gave the alarm bells a further rap by saying the global economy ‘could be in the early stages of a very serious situation’, while George Osborne underlined the cause for concern by pointing out how open the British economy is, and that we are ‘not immune’ from the crisis.

What’s going to happen to us?

In the absence of a crystal ball, that’s impossible to say. China has invested billions into the UK, but plans to continue doing so – specifically into infrastructures such as power stations and transport, as originally planned – may well be put on the back burner. So too the immense flow of billions into London’s housing market.

But for now, it is the devastating blow to our equity indices which will inflict more misery on beleaguered savers and pensioners, who’ve endured a miserable time since the recession as it is. Aside from material dents to their net asset value, rumours are already rife that the turmoil in China could delay an increase in base rates by the Bank of England until 2017.

So what can we do?

Again, got that crystal ball handy? In addition to centralising its stock market, China has now cut its rates for a fifth time this year in a bid to increase liquidity in their flagging economy, but it remains to be seen if any of these counter measures will stop the bleeding.

Few believed China could sustain its exceptional levels of growth into eternity, but British investors and those with pensions could never have anticipated such shockwaves at the first sign of the handbrake being pulled up.

A popular school of thought has emerged suggesting that the best course of action is to ride out the storm; at least for the short-term. The idea is that selling up on a mass scale will not only crystallise a loss, but also contribute to the self-fulfilling prophecy which so heavily impacts share prices. It’s easier said than done though, and for those with a high concentration of equity-linked investments in their portfolios, it’s a personal decision to make, and one which we’re not qualified to advise on.

Yet for those looking to do more with their liquid assets, such crises surely enhance the appeal of an investment avenue such as peer-to-peer lending (P2P). For some, the temptation with plunging share prices can be to opportunistically buy low, with a view to selling high in the future. The other side of the coin, though, is the old adage ‘Don’t catch a falling knife’, and in the current climate, it’s a tough one to dismiss.

Instead, peer-to-peer lending offers an investment alternative with little (or no) dependency on the goings-on in China, or anywhere else for that matter. In fact, performance of P2P loans has precious little to do with share prices in general. Many asset classes fare well when the stock market booms, but suffer proportionally during bad times (such as recessions). However, the below graphic demonstrates the correlation of peer-to-peer lending with other major asset classes in the US during the 2008/09 recession. 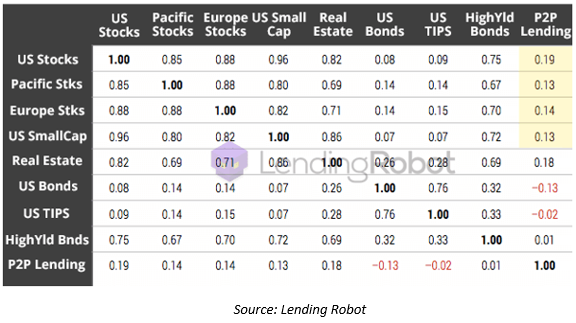 The section highlighted in yellow on the right indicates P2P’s correlation to global stock markets is less than 0.2, whereas the four stock indices on the left have correlations above 0.8 with each other. Real Estate, too, is strongly correlated to equities. While similar data for the UK isn’t readily available, rates of default in prime consumer peer-to-peer lending platforms in the UK remained between 2-5% during the recent recession.

Such results demonstrate peer-to-peer lending’s relative autonomy from other asset classes, and from a lender’s perspective, there is nothing to suggest a significant relationship exists between short-term stock market performance and borrower default; which is the biggest threat to return on investment in P2P.

A ‘steady ship’ in times of uncertainty

With the economy recovering relatively nicely, it’s difficult to shake the sense of injustice that elements so far beyond the UK’s borders can affect our bottom line on such an individual level. But the reality is that with such an open economy, those with ISAs and pensions so inherently linked to stocks and shares are vulnerable to spooked markets and shocks such as China’s slowdown.

But while we would never advocate wholesale changes, nor a commitment of an entire investment portfolio into any single asset class, peer-to-peer lending might just be a suitable gateway for many investors to more predictable returns in times of extreme uncertainty.