Wayne is an Occupational Therapy Adaptations Assistant for LBHF, a position he has held for three years. He lives in Southall, north-west London, and has a daughter aged 21. One thing Wayne had begun to notice was that his credit card debt was beginning to creep up, and although it was by no means leaving him in difficulty, he knew that there was a more cost-effective way to manage the situation. So in April, he decided to take control of his finances with a loan from Lending Works… 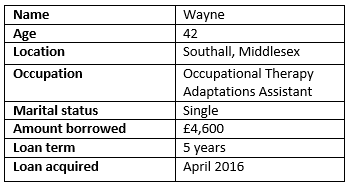 Why I decided to consolidate my debts

I’ve always prided myself in the ability to live within my means, and I’ve always thought of a credit card as just a convenient tool to use here or there. But – like many people, I daresay – I found myself with slightly higher balances on my cards than usual in the months following Christmas. Given that each were charging interest in the region of 20 per cent, keeping up with repayments was becoming quite expensive.

In fact, even though I only owed a little more than £2,000 on one of them, my minimum monthly repayments were in the region of £115. Worse still, I was informed that an additional £57 would be added to my balance in May if I didn’t pay the loan off in full. It felt like I was paying above the odds, and I became a bit fed up with just accepting my fate. I knew there had to be a better way.

Taking control and applying for my loan

I considered balance transfers, but given all the fine print involved, I decided that a debt consolidation loan was an easier way to go. I also knew I had a decent credit rating, so consolidation seemed like a more suitable solution anyway. I’ve long had an account with Argos, so decided to approach them as a start. They pointed me in the direction of a price comparison site, where Lending Works - whom I had not heard of at the time – were top of the pile.

I went ahead with you guys though, and I was amazed at how simple the application process was. It wasn’t too intrusive, and within a day or two, I was approved. The next day, the funds were in my account, and that was that. Or so I thought!

I got onto the phone to make payment to the two credit card companies I had outstanding balances with as soon as the money hit my account. The first was fine, and I cleared my balance without a problem. However, the other one insisted that I post them a photo copy of the front and back of the debit card in order to prove that I owned it as a way to eliminate possible fraud.

In the meantime they blocked the debit card and the money left my account pending payment. I mailed the documents they required, but a week later the money was returned to my account. So the next day I went into a branch of my bank and made a fast payment to them, clearing my account with them.

However, the following day I went to withdraw money from my bank account and was horrified to see I was £500 overdrawn. They had gone back into my account using the old authorisation code and took the payment that they had initially rejected and returned!

It was a nightmare scenario, and it all happened on the weekend of my girlfriend’s birthday. After several calls to Visa, the card company and my bank, I was issued a refund. But this wasn't until the Monday. All this because I simply tried to clear my debt with them!

Embracing a new way of finance

Anyway, thank heavens for the loan Lending Works gave me or I would still be dealing with credit card companies and their extortionate interest rates today. In my opinion, peer-to-peer lending companies are the future when it comes to unsecured lending. It just makes sense to have such a simple, streamlined and efficient process, especially if it means everyone involved gets a favourable rate.

I quickly realised how much I could save on repayments, and am thus very comfortable with the debt I have taken on. But as pleased as I am with my experience, I’m looking forward to paying off the debt soon in order to pave the way for becoming a lender. Aside from being a good investment, I think it would also bring me a lot of satisfaction knowing that I could help people who are in a similar situation to the one I faced.