Andy Whitehurst lives in Crewe, Cheshire, and has been employed by HW Coates as an HGV driver for the last 18 months. Andy has a solid credit history to his name, and in 2014 he decided to put it to good use by seeking a low-cost personal loan to finance one of his life’s passions – motorbike racing.

Why I took out the loan

It started three years ago when my brother began racing his motorbike. I always went with him as the mechanic, general fixer and sponsor. Yet every time I went along, I wanted to race. I’ve had a motorbike since I was 16, and managed to race back in 2000. But money was an issue back then, so I had to stop.

Anyway, after a great first season with my brother, we became champions in our class, Streetstock 700, in the second. I relished being a part of it, and it’s hard to beat that winning feeling. That’s when I decided I wanted to get racing again, and experience it for myself. The first step though was to get a proper racing bike!

I had my heart set on a very specific type of bike - a KTM RC8. It’s a 1190cc V-twin Superbike, and I knew this would be the tool to help me win races in my first season. But I didn’t have the funds to cover the cost of a bike, so I had to look at taking out a loan.

I looked at a few banks, as I have done in the past. To be fair, there were some decent offers on, but Lending Works had the best APR, so it seemed like a good choice. I hadn’t even heard of peer-to-peer lending either, but I liked the concept, and it was all so quick and easy.

The process was quite different from what I have previously experienced too. It felt more personal. Not only did Lending Works make it very straightforward, but they also made sure that the amount I was getting was the right amount, and one which I could afford.

My loan was then approved within a day, and 24 hours later the funds were in my account. Needless to say, I didn’t waste any time heading down to the dealership to purchase my bike. It really was an exciting time for me! 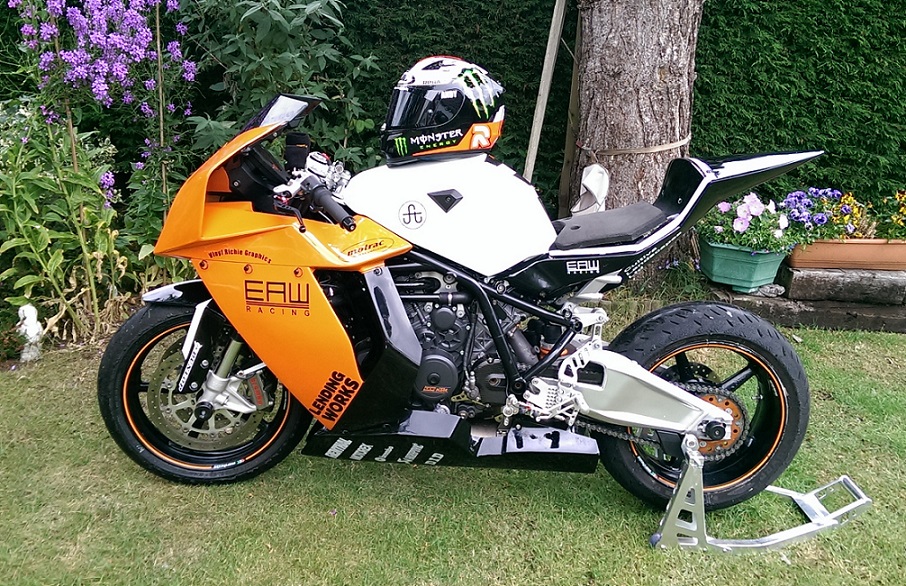 Getting on the bike again

Before I could get racing, I needed to do my ACU (Auto Cycle Union) licence, and I completed this in July. It’s worked out quite nicely because I got the chance to get some races under my belt in 2015, before giving it a full go this season.

For me, it’s all about the speed, the challenges and the goal to win. I am able to get so much more out of my bike on the track than on the roads. It’s safer on the track too, because you don’t have to worry about oncoming traffic. Also, there’s a brilliant camaraderie between racers, and it's a great weekend away. We race all around the country - Brands Hatch in Kent, Oulton Park in Cheshire (which is my local track), Pembrey in South Wales and Cadwell Park in Lincolnshire to name a few.

The Streetstock class is basically a budget class of racing. All you need to do is take your road bike, strip off the wing mirrors and indicators, and you can race it. Most people put on a race fairing and a race exhaust, but it’s ultimately a class to get people into racing without the high cost.

I am fully aware of the dangers involved. In fact, my brother had a nasty crash at Cadwell Park last April. A bike had gone down in the middle of one of the climbs, and as my brother came around the blind corner just before, he saw it too late and clattered straight into it. It sent him flying almost 10 feet in the air, and he fractured his wrist badly when he landed. These sorts of things obviously play on my mind, but it’s the risk I take for doing the sport I love.

In terms of my ambitions, it’s just about competing at the highest level possible for me. I’m there to win, but I also want to improve on my skills. By helping out my brother for the past three seasons, I've learnt a lot already, so it’s time for me to put this knowledge into practice now.

Paying back the loan and my views on borrowing

It’s the first time I’ve ever taken an unsecured loan, and I certainly gave it a bit of thought beforehand. But it wasn’t really that difficult a decision for me to make. After all, I have a stable job – one that I am very happy with – and I thus have a clear picture of my incomings and outgoings each month.

Ultimately, I chose to take out this loan by asking myself one simple question… Can I afford it? I’d never try and take out more than I can afford, and sometimes it’s easy to take an extra grand here or there. But then it can easily spiral out of control.

I'm very comfortable with the level of debt I took out, and that's the reason why it never worries me. I find myself to be very good with money. If I get a loan, I always pay it back on time. I know I did the right thing by saving up some money, and then getting a loan for the rest of the money I needed. That way, I'm keeping to the budget I set myself.

For anyone considering taking out a loan to finance something they really want, I would recommend they follow a similar thought process. Life’s too short, and you should do what you can to indulge your passions. If getting a loan is what it takes to make it happen, then, provided you can afford it, I say go for it!