Mick is a groundsman from Sheffield, where he lives with his wife and 18-year old daughter. He has been in his job for 15 years and has an excellent credit history. Yet in March 2015, he decided to look for a good-value loan so that he could make a somewhat unusual purchase. And, as you’ll see below, it is one that has brought great joy to his family, and likely earned him plenty of brownie points too!

Why I took out a loan

About three years ago, my wife Michelle decided that she wanted to lose some weight, so she joined Slimming World; initially to support a friend. The plan really worked for her though, and she made fantastic progress each month. Once she sets her mind to something, she becomes very dedicated to the cause, and this was no exception.

Two and a half years later, she had lost 8 stone & 2lbs. It was an incredible achievement! We had made a deal beforehand that I would buy her a pair of shoes for every stone she lost, and of course she was duly rewarded with eight new pairs over that time. But I was so proud of her that I thought she deserved more. 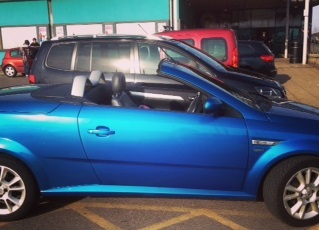 It had always been a lifelong dream of hers to own a shiny convertible, and it just felt like the perfect time to treat her. I had a look around online and went to go see a few models, and then I found this one. It just ticked all the boxes, including the colour. And, just as a little cherry on top, the registration had her initials on it! I knew it was the right car for her, and that’s when I decided to look for a loan.

Once I knew which car I wanted to buy, it wasn’t only about getting a loan at the best possible price. A big priority was to get one as quickly and conveniently as I could. Applying for loans with banks has never been an experience I have particularly enjoyed, so I went on a few price comparison sites to find some better alternatives. Lending Works jumped out at me due to their competitive rates, but what impressed me even more was the process itself.

It was just so quick and easy to apply. I normally ask my wife to help me complete any online applications but this was straightforward. I filled out the form, had a response the next day, and after answering one or two questions, the money was in my account 24 hours later.

The day I handed over the keys

The moment I told my wife, she wouldn’t believe me at first. I insisted though, and when we pulled up outside the dealership, she assumed I might be getting her a mini or something. But when she saw the car and realised I was telling the truth, she started shaking and laughing at the same time. It was the sort of reaction you just can’t put a price on. She even made me sit down and teach her to put the roof up and down for about 20 minutes! 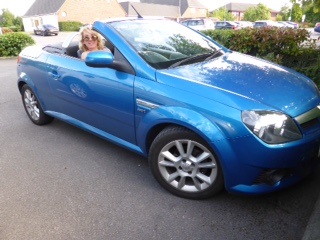 Paying back the loan

I suppose some people might argue that I’ve taken on debt for a ‘luxury purchase’, but I don’t really see it that way. Yes, it is a bit of an indulgence, but my wife has worked so hard and she deserves it. She actually had a 4x4 because our daughter used to be a competitive figure skater, but now that she has grown up, Michelle doesn’t need it anymore, and the convertible is great for getting her to work in the city centre, or down to the gym. It’s also more economical too.

In truth, it wasn’t a difficult decision to get the loan, but I gave it a lot of thought nevertheless. I took into account the level of payments I could afford before I applied, and made sure the debt wasn’t going to put any sort of strain on our budget. I can’t say the loan worries me too much on a day-to-day basis.

Besides, I think life is too short to not do the things that make you happy. My wife absolutely loves the car, and, to be honest, I’m quite fond of it too! We both work hard, and now that our daughter will be leaving home soon, I thought it was time to start enjoying ourselves together.