Quick guide to how our interest rates work

When making the decision to lend through a peer-to-peer platform there are many things to consider. Factors like simplicity, flexibility and the level of protection for your funds are important in determining which platform suits you best. However, the element most likely to pique your interest is the rate of return you will receive. After all, P2P lending is an investment, and the primary objective is to gain as high a yield as possible on your capital at an acceptable level of risk.

At Lending Works, we pride ourselves on consistently and safely delivering competitive rates of return. Yet because we operate a marketplace which deals with the supply and demand of both lenders and borrowers, it must be borne into mind that our rates are subject to change in order to maintain appropriate levels of liquidity.

What causes these rate changes?

A peer-to-peer lending platform such as Lending Works acts as a facilitator for lenders to lend money directly to borrowers. By cutting out the big financial intermediary, both parties benefit from a better rate of interest. Of course, for such a marketplace to function effectively, supply and demand needs to be balanced on both sides of the equation, and the rate of interest paid by borrower to lender, the ‘base rate’, is key to this equilibrium.

The rate of return lenders receive is intrinsically linked to the overall interest rate paid by borrowers. We do not charge any fees for lending – instead, we take a small fee from each of our borrowers to cover our overheads and to make a risk-weighted contribution towards the Lending Works Shield. These fees are incorporated into the overall cost of borrowing i.e. the Annual Percentage Rate (APR).

The majority of the APR is made up of the base rate of interest the borrower agrees to pay the lender, and it therefore follows that the base rate has an inverse relationship to supply and demand for lenders and borrowers.

In other words, if we increase our base rates – other things being equal – it is likely that there will be an influx of lending capital. On the other hand, borrowing becomes more expensive, and demand for loans should decrease. If this gap between supply and demand is significant enough, there can be a situation whereby there is a surplus of lending capital, resulting in it taking longer for us to match these funds with incoming borrowers.

Indeed, if rates are too low, then the converse situation could arise whereby demand for loans exceeds the supply of lending capital. In this instance, borrowers could end up waiting longer for their loans to be funded.

We thus review our rates on a weekly basis in order to keep the marketplace operating effectively, which ensures there is sufficient liquidity to meet supply and demand on both sides of the equation. Our aim is to smooth out the natural rate fluctuation caused by the many external factors – for example the strength of the economy, fiscal and monetary policy, inflation, loan seasonality and price competition - in order to limit rate volatility.

What happens if the rates change before my funds are matched?

Rates are only locked in once funds are matched with creditworthy borrowers (i.e. once the loan agreements have been made). However, given that our rates are subject to change every seven days, sometimes rates increase or decrease during the loan matching process, and you could end up receiving a different rate to the one advertised at the time you made your lending offer(s).

While rates can move up or down, for those wary of the latter scenario we thought we’d take a look at some examples in the case of a 0.1% drop in rates:

If you choose to lend £10,000 over a three-year term, and the advertised rate is 5% (annualised), your final balance after three years would be £11,576 (before tax and assuming repayments re-lent at the same rate i.e compounded). However, if during the matching process the annualised rate were to drop to 4.9%, the total balance after the three years would drop to £11,543. That’s a difference of roughly £33 in your pocket over the three years.

Alternatively, if you choose to lend your £10,000 over five years, and the advertised rate is 6% (annualised), your final balance after five years would be £13,382. Yet if during the matching process the rate dropped to 5.9%, the total balance goes down to £13,319 – thus equating to £63 less interest earned over the five years.

Note also that these figures of £33 and £63 are over three and five years respectively, so incorporating the time value of money (i.e. inflation) means they actually carry a much smaller value in present-day terms.

How volatile are the rates?

Historically, changes to Lending Works’ rates have not only been minimal, but infrequent too. Although we review rates on a weekly basis, it is rare that they are adjusted more than once in the same month. The graph below shows the consistency of both our three and five-year lender rates since the start of 2014: 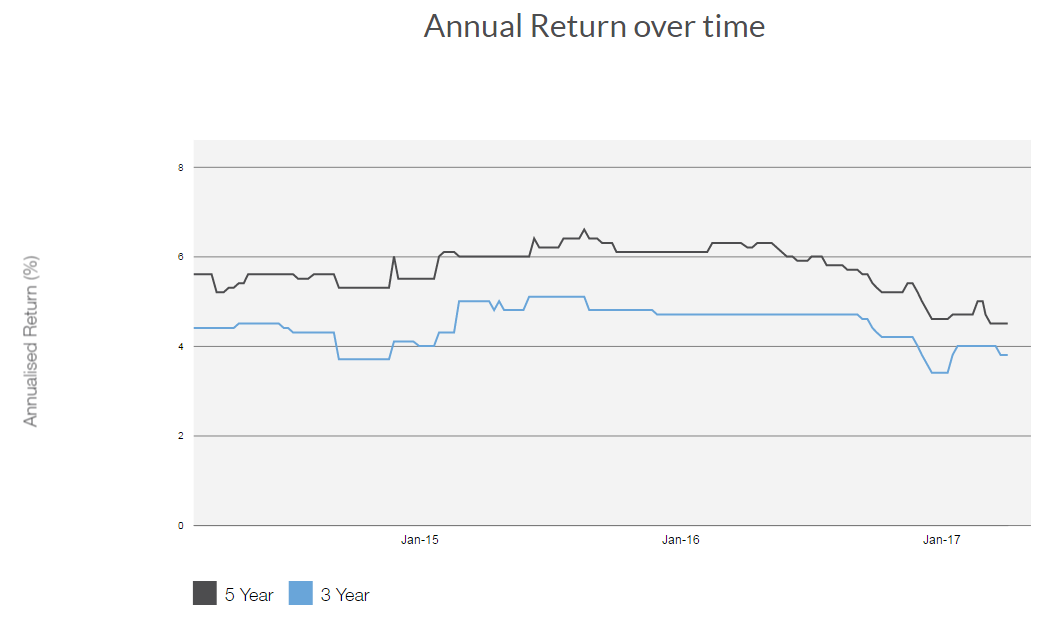 We understand that changes in rates affect both sets of our customers, and we are passionate about creating a fair marketplace. However, in order for us to balance the flow of lending capital with incoming demand from borrowers, which is influenced by a number of external factors (some of which within our control and others outside) such changes are unfortunately an unavoidable reality.

Nevertheless, we trust that the above analysis will go some way to providing insight to both prospective and existing lenders on the driving forces and impact of our rate changes.