Depending on your predisposition to decimal places, Britain may well have dipped its toes into the murky waters of deflation in March. That’s according to the announcement by the Office for National Statistics, who revealed the results of its monthly inflation data on Tuesday.

Bad? Why would deflation be bad, you ask? In simple economic terms, deflation is defined as the sustained decrease in the price level of goods and services. That means filling up your car, putting food on the table, switching on the lights and doing a whole lot of things that you enjoy gets cheaper and cheaper. Sounds great, doesn’t it?

The truth is, it can be too. That five-pound note in your hand can generally buy more than it did a year ago, and that’s largely down to falling oil prices and the resultant tumbling in the price of energy. Importantly, these are exogenous, external elements at play, and thus not necessarily reflective of a lack of growth or consumer confidence in the UK. As a result, it could even give the economy a boost, as people look to spend their increased disposable income.

Yet to base political and economic decisions on falling oil and energy costs alone is a misguided approach. A more accurate means of assessing inflation levels is to measure core inflation, which excludes items sensitive to volatile price changes such as energy and food. This figure is important as transitory price shocks can distort the economy’s price signals, and result in a false reading of the overall inflation picture. Yet as we can see below, core inflation in the UK has also been on something of a downward spiral. 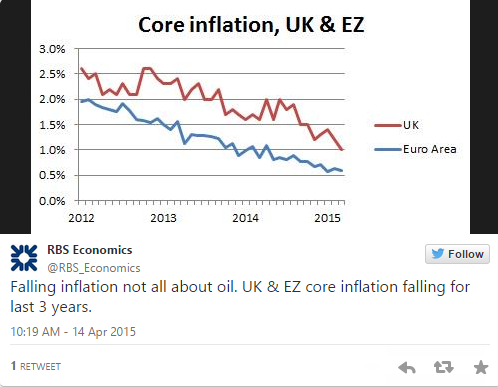 So, why would this be bad? Well, should these levels drop below zero and prolonged deflation persist, consumers might be inclined to hold off on paying for goods and services. After all, would you buy something now if you knew it was going to cheaper next week? Next month? Next year, even?

As you can imagine, such a lack of spending could potentially have a catastrophic impact on growth and unemployment, as businesses reduce the wage bill in order to remain competitive and capture a shrinking market. This was the case in Japan during the 1990s, while the US has also suffered major periods of deflation historically.

Other negative consequences would be that those in debt will struggle to stay on top of repayments, given that the amount they owe is growing in real terms. In addition, the strength of a currency can be undermined by deflation, along with bringing more tears to the eyes of savers as interest rates are suppressed. The UK has already begun to feel the effects of this, as the pound sunk to a five-year low against the US dollar this week, while promises of a hike in rates continue to be deferred.

So, are we in trouble here? Well, if Peter Cameron, assistant fund manager at Ecclesiastical Investment Management, is on the money in his interview with the Guardian, then fear not.

“Inflation has remained at 0% this morning but could well fall negative in the next couple of months. The fall in inflation over the past year has been driven by declines in the prices of essential, everyday items like food and fuel. Therefore it is the equivalent of handing consumers a temporary tax cut through cheaper household bills. What we have not witnessed in the UK so far is the toxic form of deflation that occurs when people defer purchases of big ticket items on the idea that they will become cheaper in the future.

“As long as that is avoided, these inflation figures should be considered a positive for the UK economy and also provide more wriggle room for the Bank of England when determining when to begin raising interest rates.”

In fact, according to these two experts who know the walls inside the Bank of England like the back of their hands, it may well be much ado about nothing…

And there’s some reassurance from Governor Mark Carney himself, who had this to say in the wake of the results being published….

“A debt-deflation dynamic was at the core of the Great Depression and in the Japanese malaise following the collapse of asset bubbles of the 1980s. It would be a particular concern if the pace of wage growth were to follow prices down. There is no evidence of that in the UK, where wage growth has picked up over the past six months.”

For good measure, he also went on to describe cheaper oil prices as ‘”unambiguously good.”

So there you have it then. Panic is hardly warranted at this stage, and Carney also expects inflation levels to return to the target of 2 per cent over the next few years. So you’re well within your rights to simply enjoy your fleeting days in this lovely sunshine with your new-found spending power.

As long as this enigmatic spectre called deflation doesn’t embed itself in our economy, we might actually just look back on all this as the great summer holiday of 2015, when our pockets felt that little bit fuller.