Deflation, and a more expensive life

So, which is it? Are we really in deflation and becoming better off, or are we shelling out more to keep ourselves going?

The Office for National Statistics (ONS) released their figures for the month of September, and it was confirmed that we are indeed a nation in deflation once again, with consumer prices having dipped by -0.1 per cent. It now leaves inflation in line with the lowest level seen in the UK economy since 1960, and continues the downward trend of recent years.

Supermarket price wars and plummeting fuel prices have been the main contributors to this so-called “noflation”, which has persisted for much of 2015. Yet as a consumer’s basket of goods has either remained the same or got cheaper, so too has their pay packet risen, with data released in midweek showing that real wage growth has hit its highest levels since the financial crisis struck seven years ago.

Chancellor of the Exchequer George Osborne was understandably on hand to bask in this triumph, which, ultimately, is good news for members of the public. 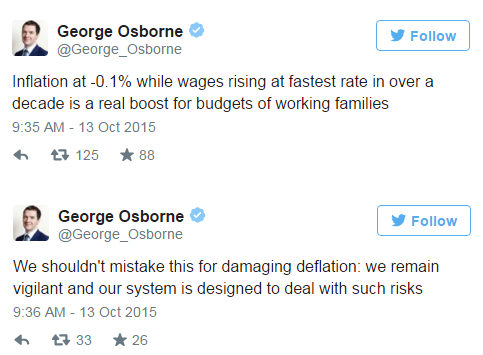 Indeed, with core inflation (which excludes more volatile components such as food and energy) at a healthy 1.1 per cent, concern among economists that we are entering dangerous territory in terms of deflation is minimal, with many believing inflation will actually return in the coming months as commodity prices appear to have bottomed out.

So, all is well in the state of Utopia then?

Not exactly. Only a week ago Bacs, the organisation behind the direct debit system in the UK, published results of its ‘Bill Tracker’ which analysed over 100 million transactions, looking for changes in payments made from consumer accounts for the previous eight years. The basket of ‘goods’ for analysis included standard direct debit bills such as council tax, energy, water, mortgages and rent, broadband, household insurance and TV licencing, and results showed that the average amount spent has shot up from £565 in mid-2007 to £668 in June 2015.

This represents an increase of 18%, and, given that over 70% of household bills are paid by direct debit, it’s a sample size that warrants a significant degree of credibility.

So, why the discrepancy to the above? Why are we paying more for bills like these, when all the disinflationary statistics say we should be paying less? After all, energy prices, for example, are inextricably linked to oil and fuel costs. So why have energy prices not fallen in proportion to their rapid decline?

Are we being robbed blind?

One must remember to consider that we’re not quite comparing apples and apples here, and direct comparisons between the ONS figures for CPI and those released by Bill Tracker cannot be made without certain caveats; not least of all the fact that the respective baskets contain different items. But it’s clear that the benefits of stable, or even declining prices are not entirely being passed on to UK consumers.

Solutions to such ‘rinsing’ have ranged from changing energy providers to nationalising them, but public discontent with the rising costs of keeping households going is something that isn’t likely to dissipate unless the disparity between the CPI and soaring bills is reduced in the near future.