“They’re poverty deniers! Austerity is a political choice being imposed on the poorest and most vulnerable!”

These were the accusatory cries aimed at the Conservatives by Labour leader Jeremy Corbyn at his Trade Union Congress (TUC) speech last week, and such musings very much set the backdrop for his plans to print money for the funding of investment, housing, energy and transport projects – his version of an expansionary monetary policy that’s been dubbed ‘The People’s Quantitative Easing’. As with any proposed ‘Corbynomics’ policy, it has polarised opinion, but the heat was ramped up by Shadow Chancellor John McDonnell, who conveyed he would strip the central bank of its independence (if given the opportunity), thus effectively terminating its control over interest rates.

But Bank of England Governor Mark Carney was unequivocal in his rebuke, citing that such changes would disrupt price stability, drive inflation, and ultimately hurt both the poor and the elderly. Wary of entering into any political fracas, Carney didn’t refer to Corbyn or McDonnell directly, but was nonetheless at pains to emphasise that ‘operational independence’ for the central bank was the ‘right model’.

Like the Governor, we’ll take the Fifth Amendment on the political debate. However, there is an example of successful expansionary monetary policy that might be of interest to Corbyn, and the circumstances which preceded it share remarkable similarities with the current macroeconomic climate in the UK.

When Bill Clinton was elected President in 1992, he took the reins at a rather gloomy time. The US economy was still reeling from the 1990-91 recession, and at that time some economists suspected the recession hadn’t even ended yet. Tying Clinton’s hands though, was a spiralling fiscal deficit which stood at 4.5% of GDP. It left him in an unenviable situation whereby he had to drive economic growth while simultaneously reducing the budget deficit.

Realising the conundrum the President faced, Chairman of the Federal Reserve (the central bank in the US) Alan Greenspan offered a divine helping hand. He indicated that while Clinton went about reducing the deficit (through an even composition of tax rate increases and reduced Government spending), the independent Fed would counteract this with an expansionary monetary policy. By printing money, and thus lowering interest rates, it was believed that consumer confidence would rise, and that spending wouldn’t be hurt by Government cuts.

No agreement was ever signed between the two men, and Greenspan never explicitly made any promises to Clinton. Yet five years later, both the deficit and the recession were a thing of the past.

This became known as the Clinton – Greenspan Policy Mix, and its success exceeded even the expectations of the Clinton administration. The IS-LM graph below demonstrates the economic theory behind the mix. The shift of the IS curve to the left represents fiscal contraction, and point B is where the economy would have plundered to (in terms of GDP/Output) in the absence of expansionary monetary policy. However, the downward shift of the LM curve owing to Greenspan’s rate cuts meant it instead sat at point A’. 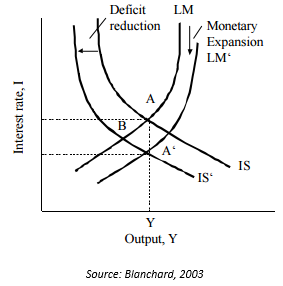 So is Corbyn onto something?

There are some indisputable similarities between the economy Clinton inherited in 1992 and the status quo in the UK. We’re also licking our wounds from a grisly recession. Inflation levels are low and stable, just as they were in the US at that time. And, as Chancellor George Osborne will testify, the UK faces an alarming fiscal deficit.

So should we implement a similar approach to Clinton - Greenspan? Is Corbyn correct to push for expansionary monetary policy?

In some ways, perhaps. However, it must also be borne in mind that Corbyn has hardly put a great deal of emphasis on reducing the budget deficit at any sort of significant rate, thus meaning his plans for printing money would appear not to have an appropriate mechanism for countering the inflationary effect thereof.

And even if he did, such solutions are seldom that simple. Clinton - Greenspan was a somewhat unusual example of macroeconomic theory succeeding in practice. But in reality, there are always external factors at play which aren’t reflected in the somewhat-rudimentary IS-LM model, and Clinton and Greenspan experienced a lot of luck along the way. US consumer and firm confidence rose far beyond expectation in the mid-90s, and the stock market also strengthened. This led to quicker-than-expected growth, which in turn boosted tax revenue – thus automatically reducing the deficit. By 1995, the Fed had actually begun to increase interest rates to prevent ‘overheating’, and the economy continued to restore itself to health with limited interference from Greenspan thereafter.

Would the UK be so lucky?

There is no guarantee that things would go as smoothly if a similar policy mix were to be implemented here, and there are in fact some significant differences between the two situations. Firstly, with base rates standing firm at 0.5%, the Bank of England has little room to manoeuvre at present, whereas the interest rate in America was nearly 7% when Clinton took office.

What’s more, the slowdown in China has put stock markets around the world on edge. Such uncertainty makes it hard to speculate on the best course of action for rates. Then, of course, there are global political problems such as the refugee crisis whose effect on the economy cannot be predicted or quantified by the equations developed by Hicks, Keynes, Marshall and other great architects of macroeconomic theory.

That’s not to say policy mix should be disregarded, and it’s a tool that’s been widely used to good effect in the past. But the issues facing the UK recovery today are extremely complex, and the solutions are sadly not as simple as many politicians – and their followers - would like to believe.

Main image "Jeremy Corbyn" by Garry Knight. Image subject to copyright. A link to the image and appropriate licence can be found here. You must not use or reproduce this image other than in accordance with the licence.