The ultimate guide to annuities

It’s a financial product that has come under the spotlight in the wake of the recent pension reforms, but what exactly is an annuity? In relative terms, it’s a means of trading in one’s pension pot for a guaranteed lifelong income, and this peace of mind ultimately makes annuities the favoured choice among many pensioners.

Budgeting can be difficult enough as it is, but apportioning pension savings over an indefinite period of time is a responsibility few would want to shoulder. By making this agreement with an annuity provider (typically an insurance company), a person can enjoy their golden years safe in the knowledge that they’ll have a secure monthly (or annual) income for the remainder of their life.

Are there different types of annuity?

There is actually quite a wide variety of annuities available in the UK, and prior to the recent pension reforms, picking a particular type of annuity was crucial given that the decision was irreversible once made. For those who’ve already purchased an annuity, from April 2016, it will be possible to sell an annuity for cash (although not to the original provider), but this lump sum will be taxable in the same way as any other income you receive during the year. It therefore remains prudent to choose wisely from the options available before making the purchase.

Single-life annuity: A single-life annuity pays an income only to the holder of the policy, while he or she also has the option of buying a guarantee whereby the annuity will pay out for at least five or 10 years after it was purchased – regardless of whether the person dies in that time or not. It offers an indirect means of providing for a surviving partner or spouse.

Joint-life annuity: If ensuring long-term financial security for a spouse is the primary objective, then a joint-life annuity is usually the better option, as this will continue to pay the survived partner an income until they too pass away. The starting rate of this option is inferior to that of a single-life annuity, but in the long run could end up paying out considerably more.

Level annuity: This simply means that each pay-out is set at a fixed amount for the remainder of one’s life.

Escalating (or Increasing) annuity: Rather than being left vulnerable to the effects of inflation and additional costs, an annuity holder can set pay-outs to increase each year, thus ensuring that the future value of their income is protected.

Investment-linked annuity: Pay-outs can also be linked to stock market performance, thus increasing income potential. Given that this inherently carries greater risk, another (more complex) alternative can be to take up this option but with a pre-agreed minimum set for the income received (also known as a Variable or Flexible annuity).

Enhanced annuity: All of the above are forms of standard annuity, and these are based on normal life expectancy. But for those in poorer health, or with a medical condition that will likely mean they die earlier, there is another choice: an enhanced annuity. These work on the principle that the policy holder won’t live as long, and should thus be compensated with a higher annuity income. Depending on the severity of the candidate’s health problem(s), an enhanced annuity can boost income by up to 50%.

Why have annuities proved so popular?

Popular would certainly be a generous term to describe annuities. True, more than 400,000 annuities are purchased in the UK each year, but this is as much down to the outgoing pension laws as it is a testament to the quality of the product. Until April 2015, those of a retirement age were entitled to a quarter of their pension pots tax free, but were forced to either annuitise the rest, or pay an extortionate 55% rate of tax on any further amount taken out.

Such regulations essentially shackled savers to annuities, and the great bone of contention for disgruntled soon-to-pensioners has been the declining rates of return they were being offered by annuity providers in recent years. In fact, it was in November 2012 that the income paid out by standard annuities plummeted to (then) record lows, and less than 18 months later Chancellor George Osborne announced at Budget 2014 that a shakeup of the pension regulations would come into being.

From 6 April 2015, the obligation placed on those with defined contribution pensions to annuitise 75% of their pots was effectively lifted. Crucially, those over the age of 55 can now ‘draw down’ from their pension pots through a series of lump sums, with the first 25% of each withdrawal tax free and the remainder subject to the marginal rate of tax. Being able to take out these smaller amounts thus not only transforms a pension pot into a more liquid income device, but also minimises overall losses to tax. What remains to be seen is whether this will significantly impact annuities, and to what extent their ‘popularity’ will be reduced.

Following the announcement at last year’s Budget speech, annuity sales dropped markedly for the remainder of 2014. And although it is premature to make any sweeping conclusions, an intriguing development was the recent findings by financial firm Moneyfacts, who reported that income paid out by standard single-life annuities plunged to new record lows in April 2015 - eclipsing the figures of 2012. In fact, the average income paid out by this type of annuity fell by 5.7% in 2014, and suffered a remarkable further decline of 6.4% in the first quarter of 2015!

How much will I get from an annuity now?

This depends on numerous variables, including purchase price, age at time of purchase, gender, postcode, state of health, type of annuity and annuity provider. But as an example, if a person buys a single-life (level) policy for £100,000 at the age of 65, they can expect to receive in the region of £5,700 per year. Delay this by 10 years, and the figure should rise to around £7,800. For a joint-life (level) annuity, corresponding figures would be in the region of £5,300 and £6,900 respectively.

What does the future hold for annuities?

The irony of annuity incomes sinking to record lows within weeks of the reforms coming into effect will not be lost on recent retirees; nor annuity providers for that matter. The freedoms have, in essence, liberated over 55s to do what they please with their pots, whether that be investing in stocks, putting money aside for their grandchildren’s university funds, going on dream holidays or buying speedboats!

Alternative finance providers such as peer-to-peer lending platforms have also been greatly encouraged by the new regulations, and the impressive returns they offer will likely prove to be an appealing option for over 55s looking to grow their nest eggs.

Yet the idea that this sequence of events will spell the end for annuities is not only fanciful; it’s far-fetched. In addition to its poor rates of return, the product has become notorious for its complexity, extortionate hidden fees, and, most of all, its inflexibility. However, the availability of enhanced annuities provides an important alternative for some. Furthermore, the ability to sell an annuity after April 2016 will reduce the much-maligned sense of ‘lock-in’ associated with buying them.

Most importantly though, the prospect of a guaranteed income for the remainder of one’s life -without any maintenance or input required - will ensure that it remains an ever present. 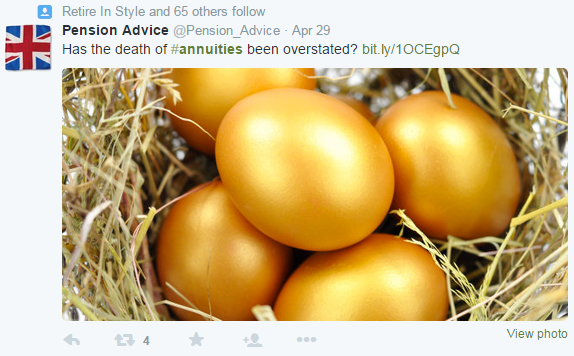 It is likely that an annuity will no longer make up (the previously obligatory) 75% of most retirees’ portfolio, and the door will therefore be opened to other investment options like P2P.

Yet with the reforms comes greater responsibility for over 55s to safeguard their pension pots, and discarding annuities (or similar alternatives) completely is a decision that should not be made in haste.